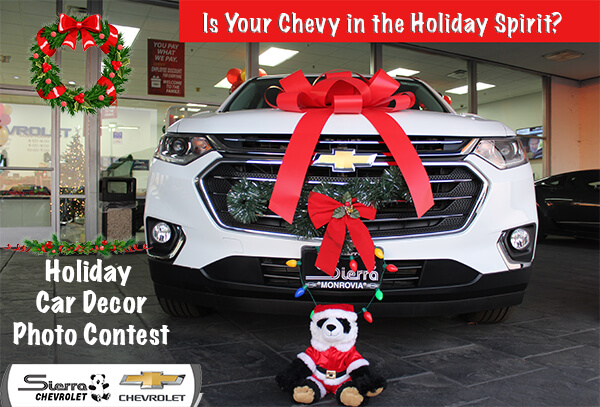 A PURCHASE WILL NOT INCREASE YOUR ODDS OF WINNING

The Contest must be entered by submitting a photo on the Sponsor’s Facebook page that complies with the Contest photo theme criteria demonstrating a Chevrolet vehicle decorated with Christmas decor. To enter, contestant must submit a photo by sending a direct message with the photo included to the Sierra Chevrolet Facebook page, posting it on the Sponsor’s Facebook page, or by submitting it via email(social@sierracars.com) to the email address listed in the Contest post on Sponsor’s Facebook page. Incomplete entries, or entries that do not adhere to the specifications or criteria, will be disqualified. Limit one entry per person. Only photos are allowed as entries. Multiple entries from the same person will be disqualified. Sponsor is not responsible for entries that are late. By participating in the Contest, entrants agree to be bound by these Official Rules and by decisions of the Sponsor, which decisions are in Sponsor’s sole discretion and are final in all matters relating to the Contest, including, without limitation, all questions or disputes regarding eligibility for the Contest and a entrant’s compliance with these Official Rules.

The Contest is open to licensed drivers who are 18 years of age or older as of  December 18, 2017 and who are legal U.S. residents currently residing in California, and who have a valid email address. Employees of Sponsor or its respective advertising and promotion agencies, those involved in production, development, implementation or handling of the Contest and any agents acting for the above entities, and their respective officers, directors, subsidiaries, affiliates, service providers, or any other person or entity associated with the Contest (collectively “Contest Entities”) and members of their immediate families (spouses, children, siblings, parents) and/or persons living in the same household as such persons, whether related or not, are ineligible to enter the Contest. The Contest is void where prohibited or restricted by law.

Odds of winning depend on the number of eligible entries received.

One Prize consisting of one $50 Visa gift card.

The Prize is not transferrable and a prize substitution will not be allowed, except at the sole discretion of Sponsor. Sponsor reserves the right to substitute a prize of equal or greater value for the Prize.

Prize winners will receive a 1099 form from Sponsor and are required to provide necessary information, including social security number, to allow Sponsor to prepare such a form. Prize winners are responsible for all taxes relating to the Prize. In the event the Prize winner does not qualify for the Prize, or declines the Prize, an alternate winner may be selected.

A total of one winner will be selected in a public vote conducted under the supervision of Sponsor. On December 22, 2017, a photo album will be created that contains the photos uploaded by all of the eligible entries that were received. Visitors to Sponsor’s Facebook page will be invited to vote on their favorite image by “Liking” the photo. Voting will be open until Decmeber 27, 2017 at 5:00 p.m. PST. The Winner will be the contestant whose photo received the most “Likes” in the photo album. The Winner will be announced on the Sponsor’s Facebook page on December 28, 2017. Winner will have 24 hours from the time of the first notification to claim the Prize. If any winner cannot be contacted, is ineligible, fails to claim the prize within 24 hours from the time award notification was sent, or fails to timely return a completed and executed declaration and release as required, the Prize may be forfeited and an alternate winner selected.

Sponsor, at its sole discretion, reserves the right to cancel, suspend or modify the Contest or any portion thereof and to conduct the drawing from among all eligible entries received prior to and/or after (as appropriate) the action taken by Sponsor, if any, or award the Prize as otherwise deemed by Sponsor to be fair, appropriate and consistent with the spirit of these Official Rules.

If a Prize winner does not fulfill any requirements set forth in the Official Rules, the Prize will be forfeited and a substitute winner may be selected.

By entering this contest (e.g., photo, video, text, etc.), each entrant understands and agrees that Sponsor, anyone acting on behalf of Sponsor, and Sponsor’s licensees, successors, and assigns, shall have the right, where permitted by law, to print, publish, broadcast, distribute, and use in any media now known or hereafter developed, in perpetuity and throughout the world, without limitation, each entrant’s entry, name, portrait, picture, voice, likeness, image, statements about the Contest, and biographical information for news, publicity, information, trade, advertising, public relations, and promotional purposes, without any further compensation, notice, review, or consent. By entering this contest, each entrant represents and warrants that his/her entry is an original work of authorship, and does not violate any third party’s proprietary or intellectual property rights. If an entrant’s entry infringes upon the intellectual property right of another, the entrant will be disqualified at the sole discretion of Sponsor. If the content of your entry is claimed to constitute infringement of any proprietary or intellectual proprietary rights of any third party, entrant shall, at entrant’s sole expense, defend or settle against such claims. Entrant shall indemnify, defend, and hold harmless Sponsor from and against any suit, proceeding, claims, liability, loss, damage, costs or expense, which Sponsor may incur, suffer, or be required to pay arising out of such infringement or suspected infringement of any third party’s right.

For a copy of the Official Rules or the names of the Prize winner, send a self-addressed envelope to “Halloween Pet Costume Photo Contest” Official Rules and Winner’s Name Request” Sierra Chevrolet, 721 E Central Ave, Monrovia, CA 91016. The winner’s name will be available after the winner has been verified and the Prize has been awarded.

Each person entering the Contest, for the entrant and entrant’s heirs, executors and administers, (i) agrees to release, indemnify, defend and hold harmless the Sponsor from any and all liability for any injury, losses or damages to persons, including death, and property, resulting or arising in whole or in part from the Contest or participation in the Contest, or acceptance/possession and/or use/misuse of the Prize, and (ii) hereby releases all rights to bring any claim, action or proceeding against the Contest Entities, including any rights under California Civil Code Section 1542 which provides as follows: “A GENERAL RELEASE DOES NOT EXTEND TO CLAIMS WHICH THE CREDITOR DOES NOT KNOW OR SUSPECT TO EXIST IN HIS OR HER FAVOR AT THE TIME OF EXECUTING THE RELEASE, WHICH IF KNOWN BY HIM OR HER MUST HAVE MATERIALLY AFFECTED HIS OR HER SETTLEMENT WITH THE DEBTOR.”

Sponsor reserves the right to discontinue the participation privileges of any entrant who engages in any fraudulent activity or uses the Contest in a manner inconsistent with these Official Rules or any federal, state or local, laws, statutes or ordinances. In addition to discontinuance of participation privileges, Sponsor shall have the right to take appropriate administrative and/or legal action, including criminal prosecution, as it deems necessary in its sole discretion.

Any controversy or claim arising out of or relating to the Contest, the awarding or redemption of the Prize, and/or determination of the scope or applicability of these Official Rules or their enforcement or interpretation shall be governed by and construed in accordance with the substantive laws of the United States of America, and the State of California without giving effect to any choice of law or conflict of law rules or provisions (of California and any other jurisdiction) that would cause the application of any other state’s laws. Any such controversy/claims shall be filed only in the state courts of California and each entrant hereby consents and submits to the personal jurisdiction of such courts for purposes of litigating any such controversy/claim.

Sponsor is not responsible for incorrect or inaccurate transcription of information, for problems related to any of the equipment associated with the Contest, for any human error, for any interruption, deletion, omission, defect, or line failure of any telephone network or electronic transmission, for problems relating to computer equipment, the Website, software, or for any other technical or non-technical error or malfunction. UNDER NO CIRCUMSTANCES, INCLUDING, BUT NOT LIMITED TO, NEGLIGENCE, SHALL SPONSOR AND SPONSOR’S OFFICERS, DIRECTORS, SHAREHOLDERS, EMPLOYEES, AGENTS, SUCCESSORS AND ASSIGNS BE LIABLE FOR ANY DIRECT, INDIRECT, INCIDENTAL, SPECIAL OR CONSEQUENTIAL DAMAGES ARISING OUT OF THE CONTEST OR PRIZE OFFERED THROUGH THE CONTEST, EVEN IF ANY OR ALL OF THE FOREGOING OR ANY OF THEIR AUTHORIZED REPRESENTATIVES HAVE BEEN ADVISED OF THE POSSIBILITY OF SUCH DAMAGES.

The Contest is in no way sponsored, endorsed, administered by, or associated with Facebook.